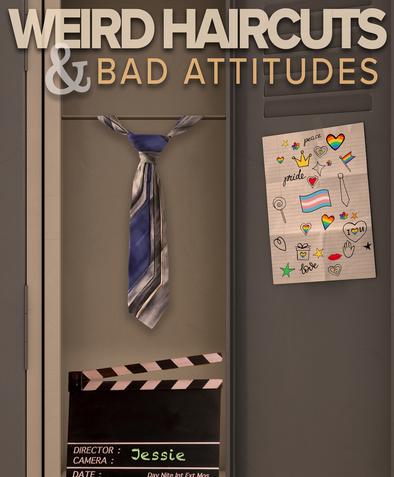 ​Jessie is a teen trying to figure out who they are. She’s awkward, nervous and not even sure she’s a girl. When Jessie’s family moves her to Texas she’s intrigued by Parker the new TV Production teacher at Bell Hood High School. Parker seems young, cool and confident to the impressionable Jessie.

Little does Jessie know, her new teacher is a former student of Bell Hood High who is still dealing with her own past trauma and experience of homophobia at the school. Parker begins to question her return to the school when she’s confronted with mixed memories of her former teacher, Penny, a closeted women with her own issues, who is now the assistant principal of the school.

When Parker asks students to make a documentary that “challenges them” Jessie works with a love interest on a film about their gender and sexuality. This documentary brings up Parker’s own issues with gender and puts Parker and her closeted former teacher in conflict over whether the documentary is appropriate for the high schooler.

Three micro-generations of AFAB queer people collide at a high school in the south in this coming of age script about the intersection of gender and sexuality. The story ask what the responsibilities of queer teachers are to their students and investigates how collective trauma keeps queer people from being able to support each other.

"Intimate, quirky, character-driven, and powerful, this dramedy tells the uplifting story of three distinct people, from three very distinct generations, coming to terms with their identities amid a sea of confusion and intolerance. And in telling this unique story of courage and acceptance, the writer strikes at the heart of some of our most universal human experiences. So rarely in Hollywood do we see stories that focus specifically on LGBTQ+ issues, and the writer does it here in away that's authentic, honest, and accessible to all audiences, whether they're members of the community or not. What's most impressive here, to be sure, is the depth and development of the ensemble cast. Parker, Jean, Jessie, Amy, and Penny all confront similar conflicts and issues in this story, but never from the same, cookie-cutter point of view. Each one is a dynamic, complex individual with their own strengths, weaknesses, flaws, and contradictions that make them human and interesting, and give them room to grow and arc. It's the different roads toward acceptance and peace they find that really make this script so satisfying. The writer also does a nice job building this intolerant small town world, bringing it to life as a personified antagonist of its own. All in all, a solid effort by the writer."

"this story provides excellent representation to a few marginalized communities who might flock to a film they can see themselves in."

"Weird haircuts and Bad Attitudes is an ambitious and empowering piece of dramatic work. It's a cathartic dissection of queer identity told through the lens of three generations of characters. The author uses an ensemble cast to tell an emotionally resonant and grounded story about a wide range of LGBTQ topics. It's unique and brave vision that will undoubtably connect with underserved audiences across the country if produced."